Videos
Galleries
Motorsports
Shows
Import
Domestic
Jeep & 4×4
Truck
Fast Lane
The Mustang was an immediate success for Ford when it was introduced in 1964, and that got sister division Mercury thinking about how it could tap into the same enthusiastic buyer base with a pony car of its own. Given that Mercury had a reputation for providing slightly pricier, more upscale models compared to Ford, any version of the Mustang platform wearing its badge would naturally tend towards a refined version of what was already on offer. 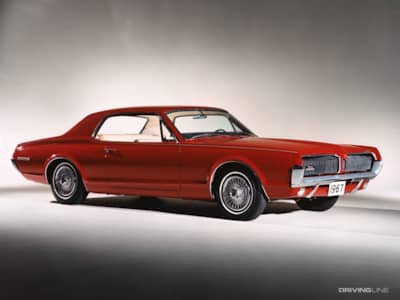 With this in mind Mercury developed the Cougar, a car that polished the Mustang’s bones and used them as the basis of an equally potent muscle machine. Largely overshadowed by its ultra-popular sibling, the Cougar still managed to provide serious thrills for those in the know while also carving out a successful racing career. The car’s tire-shredding glory would only fade once it shifted completely from performance to plush in the early 1970s.
The genesis of the Mercury Cougar began well before the Mustang’s phenomenal sales gave the project the push it needed to make it into dealerships. Mercury had been working on a car codenamed ‘T-7’ in the years leading up to the Mustang’s launch, (which had itself been dubbed the ‘T-5’), but largely as a design study of what slightly larger, feature-stuffed Mustang might look like. 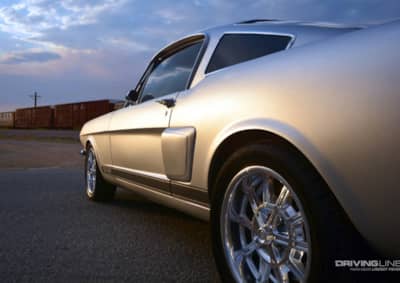 The project became known as the ‘Cougar’ after Ford’s own marketing had passed on the name in favor of the bucking bronco image that would soon become famous. It was the kind of car a would-be Thunderbird buyer might drive before they could afford the larger luxury model, if you bought into Mercury’s hype, and it managed to stand apart from the Mustang in a number of key ways. 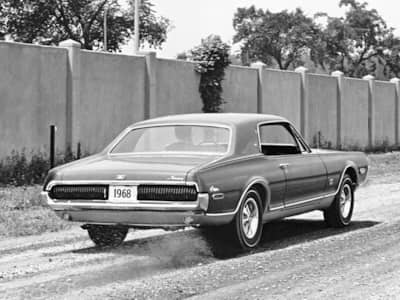 When the Mercury Cougar appeared in 1967 it added almost 7 inches of length to the Mustang’s platform, of which 3 inches was wheelbase. This translated primarily into a roomier interior and a more prominent hood, which featured a set of hidden headlights at its leading edge as part of a grille that was bisected in the middle by a prominent bulge. Further feeding its wannabe-T-Bird origin story were a set of sequential tail lights at the back. 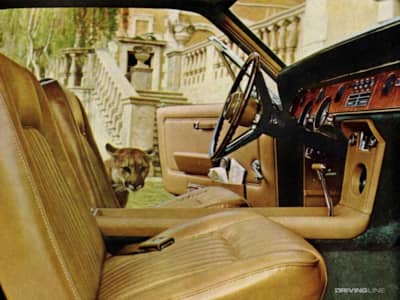 Inside, the Cougar rode smoother thanks to its wheelbase boost and the softer suspension settings it left the factory with versus its Mustang cousin. The car was also quieter (and heavier due to the extra sound deadening), and featured available wood grain trim and leather seats.
Things got a little more raucous in the Mercury Cougar’s engine bay. For all its genteel leanings, the coupe (and later convertible) had access to most of the Mustang’s engine options. Initially, buyers could choose between two versions of the common 289 cubic inch V8 (with the mightiest delivering 225hp), or a 390 cubic inch, 320hp V8. A four-speed manual or a three-speed automatic served as the transmission options, and they would remain in play throughout the original Cougar’s lifespan. 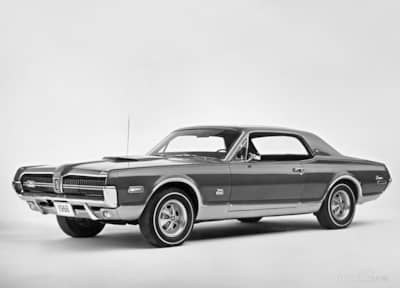 The following year a 302 cubic inch motor was briefly available (as was a lower-performance 390), but the real story were the 427 and 428 cubic inch motors that came online by the middle of 1968. The 427 in the GT-E was a direct descendent of Ford’s NASCAR racing program, and it produced a whopping 390hp and 406 lb-ft of torque.

Featuring a side-oiler lubrication system that performed exceptionally well under race conditions, less than 400 of these cars were made before they were replaced by the newer and lighter 428 cubic inch Cobra Jet V8 (underrated at 335hp). 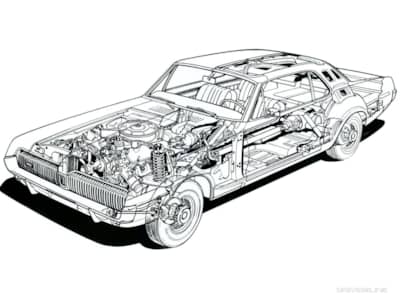 The Cobra Jet motor continued in 1969, joined by a new 351 cubic inch unit as the base motor (good for up to 290hp). Also in the cards this year was bit of bloat as the Cougar saw its bodywork punched out in every direction, with a new horizontal grille stretching the full length of the front end without any beak-like interruption. Strangely, the grille would revert to its vertical-slat ‘razor blade’ look the following year as the restyling was received poorly by Mercury fans. 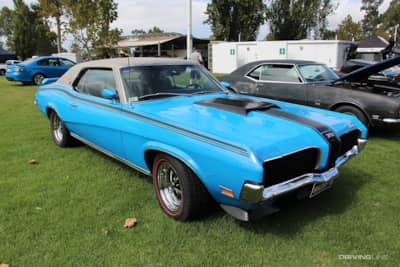 1969 also introduced the ‘Eliminator’ trim, with its uprated suspension and the option of the Boss Mustang’s 302 cubic inch, Trans-Am derived engine. This near-competition motor officially produced 290 horsepower yet was somehow more expensive than the 428 Cobra Jet big block. Available with a number of other options (such as a locking rear differential), the Eliminator was built to capitalize on the Cougar’s success in SCCA racing. 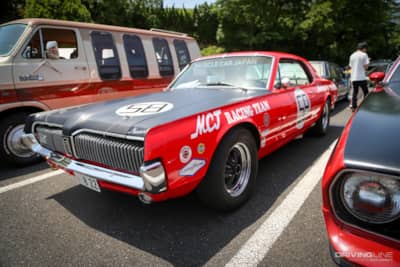 The coupe won four races in its first year of Trans-Am competition (1967) with superstar Dan Gurney (Alongside Parnelli Jones, David Pearson, and Peter Revson) behind the wheel. Gurney would get his own tribute models from Mercury (the XR-7S and the XR-7G) that provided a less hardcore interpretation of the road racing car. After Ford decided to kill the Mercury effort and focus on the Mustang racing team, several Cougars were converted by privateers to run in NASCAR’s short-lived GT (later Grand America) Division that capitalized on pony car excitement. 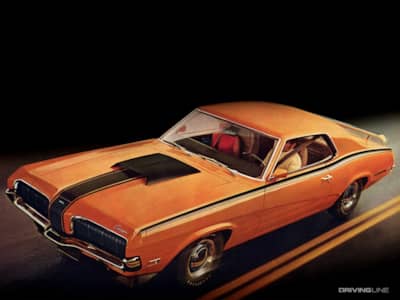 1970 carried over much of the previous year’s model mix, with a Super Cobra Jet version of the drag-friendly 428 available as well as a ram-air, 375hp 429 cubic inch V8. The 390 was out of the picture, but Cougar buyers still had a pair of big blocks to choose from, in addition to the secret weapon represented by the solid-lifter 302.
In 1971 Mercury pushed the Cougar completely into the personal luxury market that had grown up around vehicles like the Thunderbird and the Oldsmobile Toronado, and while it was still possible to specify a big block V8, the size and weight of the new platform marked the end of the Cougar as a legitimate street threat. 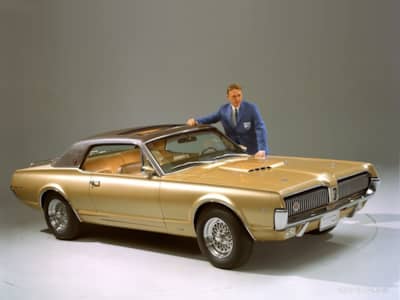 Despite its eventual growth away from pony car dimensions, the first-generation Mercury Cougar remains an appealing way to snag a high performance muscle car that walks a different path than the more common Mustangs and Torinos in the Ford lineup. Even with its differences, its ability to access the general FoMoCo parts bin when modifying or restoring its drivetrain and chassis helps keep it affordable, too, and opens up an entire world of restomod potential.
Rarer Than a Ferrari? The Lincoln Blackwood Was More Than Just a Fancy F-150
Chrysler's TorqueFlite 727 Transmission Was The Best Muscle Car Automatic Ever Built
It Runs Forever: 3 Of America's Most Successful Unkillable Engines
Unkillable Diesels: BMW’s M57 I-6
Sign up for more restomod content to add horsepower to your inbox
Continue on to the site and look for links to the latest articles, as soon as they are released.
Required Fields marked with *
Continue on to reading this issue and look for links to the latest issues, straight to your inbox, as soon as they’re released!
Driving Line® Accelerating Automotive Passion™ by providing a fresh angle of what fuels us. Recognizing that every individual’s motoring journey is unique, we seek to give form to both untold as well as celebrated facets of the automotive world. We invite you to get behind the wheel with us, it’s certain to be an interesting drive.
Loading …